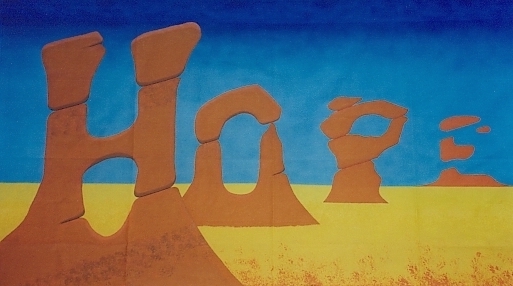 Symphonic - This banner was displayed during the "Symphonic" tour.  It was the first time that a background was incorporated. 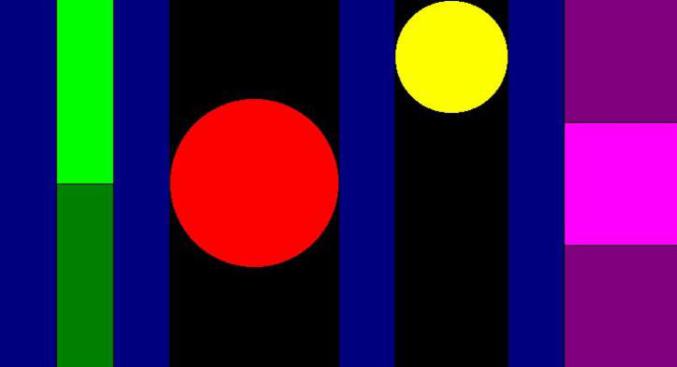 Lawn Mowed - This image is the original design which was created using the Windows Paint program.  It was later painted as a banner, however, I gave the banner away prior to taking any pictures of it.  This design was inspired by the "color-field painters" such as Barnett Newman and Mark Rothko. 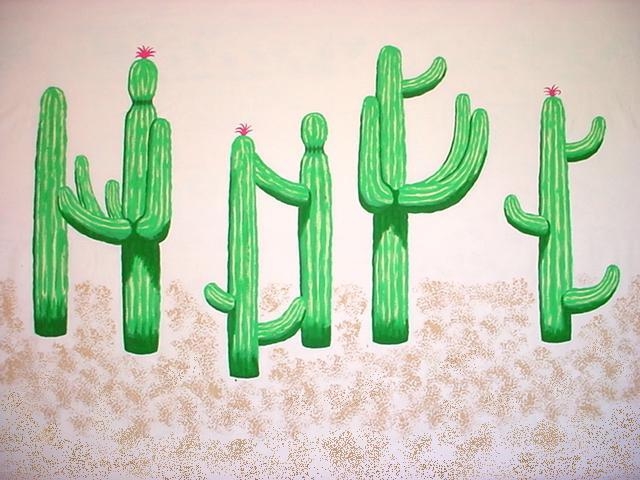 Cactus - This banner was displayed in 2002 during the "Full Circle" tour.  During this tour, on August 7, Mayor Street of Philadelphia presented YES with the Key to the City. 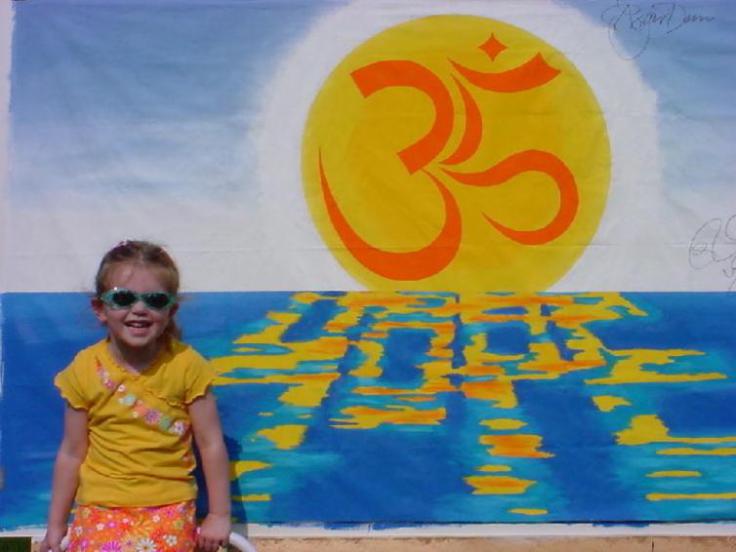 OM - Displayed in 2004 during their "35th Anniversary" tour.  The "OM" symbol is a word/term from an ancient Hindu language called Sanskrit.  It is usually recited prior to, as well as, after meditation sessions. Although there are many variations of this symbol, it often appears as what looks like a "3," followed by a backward "C," above the C is a horizontal dash, and above the dash is a dot.  The verticle dash was added to signify the number 35.  The beautiful little girl is my daughter Hayley. 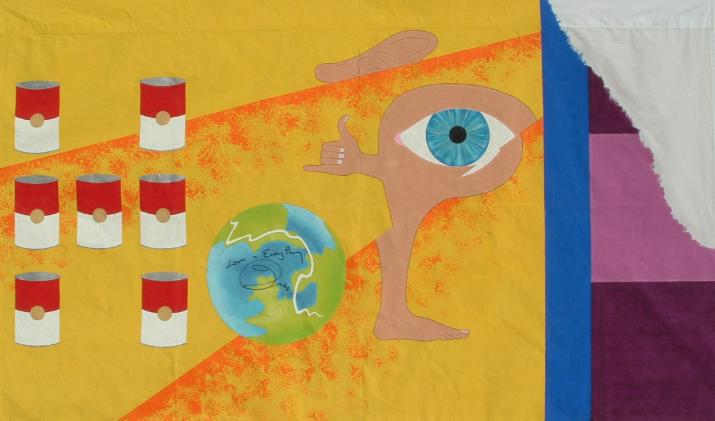 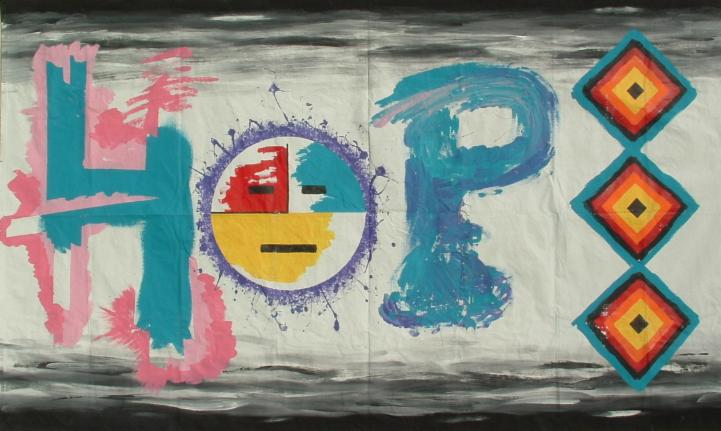 Hopi - Much of the merchandise associated with this tour incorporated the image of a Scarab.  I'm not sure how the Scarab image was associated with YES music, there was no new album/CD released at the time, nonetheless, I needed a theme prior to the start of the tour.  I felt the urge to attempt something that would be remininsent of Native American art and culture.  This was the end result. 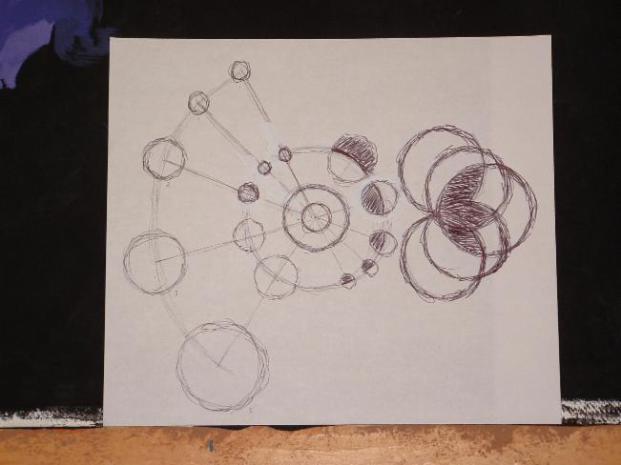 Liverpool Drawing - Prior to attending Jon Anderson's concert in Liverpool, I would be visiting Stonehenge in Salisbury.  Salisbury is known for its Crop Circle activity.  I wanted to incorporate that influence into the Liverpool banner.  The drawing above is a result of that influence.  I also wanted the banner to be colorful, so I had to think "out of the circle," so to speak.  Below is the finished product.

Liverpool - Displayed during the summer of 2009.  Jon did about 8 shows in Europe.  When I heard that he was performing at the Liverpool Philharmonic located on HOPE Street, I had to be there! 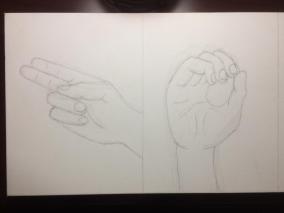 Sign language for the letters "H" and "O."  Started at my home in Piscataway, NJ. 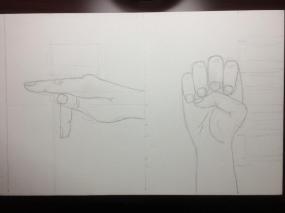 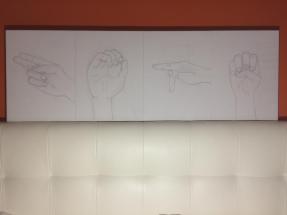 Picture of drawing just before painting it while in my hotel room in Saugerties, NY, July 2019. 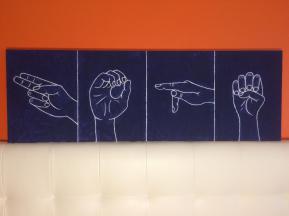 I took this picture after having just finished the painting about 3 hours before giving it to Jon Anderson.

I personally handed this painting directly to Jon Anderson just prior to his concert on Wednesday, July 24th, 2019 at Levon Helm's Studio in Woodstock, NY.  I was fortunate enough to attend his band's rehearsals on Monday, July 22nd and Tuesday, July 23rd just before the 1st concert of their 2019 tour.  Jon's new album is titled, "1000 Hands," therefore, I wanted to create a piece of artwork that incorporated Jon's album cover with my theme of HOPE.

This painting was done on framed stretched canvas and is 12 inches high X 36 inches wide.  Most of the artwork on this site was painted on large bedsheets so that Jon would be able to see it while performing in large venues.  Due to the intimate setting of Levon Helm's Studio, there was no need to create such a large project.